History of formation of air navigation in Tajikistan

Plunging in to the history of the formation of air navigation in Tajikistan we find ourselves in a fascinating journey in a time machine that takes us back in time, opening for us the veil of history, it takes us to the time when the first airplane was showed up in Tajikistan, when aviation of the country had just began its long journey, and air traffic control was just beginning to emerge. So, we begin our journey from far 1921, as the formation of air navigation in Tajikistan takes its roots precisely from January 17, 1921, the date of publication, signed by VI Lenin's decree of the CPC of the RSFSR "On the air movements in the airspace over the territory of the RSFSR and over its territorial waters." This decree was the first piece of legislation to regulate the organization of air traffic in the young Soviet state. 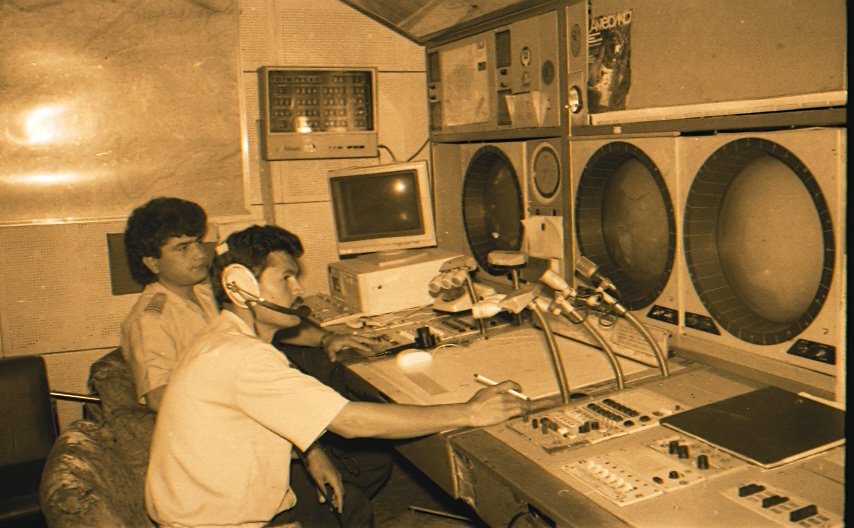 July 15, 1923 in Soviet Union first regular airline for the route Moscow-Nizhniy Novgorod was opened. Next country for opening air transport was Tajikistan and it is not surprising as Tajikistan is mountainous country and it’s rather difficult to imagine its full development without aviation.

Due to the fact that 93 percent of the republic's territory is mountainous, the construction of highways and especially railways was extremely difficult; it required quite an effort and expenditure of time. Because of this reason the quickest way to solve the problem was only with the help of aviation. Another interesting fact is that regular air service between Dushanbe and many settlements were established much earlier than road and railway. At the beginning of 1924 the arrangements for the airline Dushanbe-Bukhara had been started.  Difficulties pursued at every turn: shortage of people, there were no roads to shuttle building materials and tools, and also badly rugged terrain put obstacles, complicating the selection of equipment and airfields.  But, despite all the obstacles encountered, complicating the arrangement of the airline, works went with increased speed, and soon there was first flight, which was the beginning of the development of civil aviation in Tajikistan. It was a flight from Bukhara to Dyushambe on September 3, 1924. Such significant flight for the country was carried out on the aircraft SE-13, which was piloted by Rashid - Beck Ahriev and Peter Komarov. Aircraft SE-13 was the first plane on the lines of Tajikistan; it was an all-metal cantilever monoplane passenger. 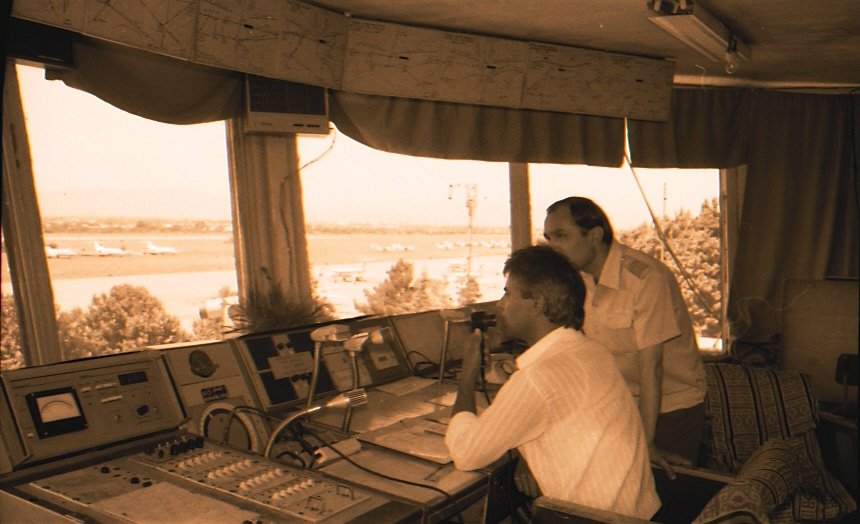 Opening of the Bukhara- Dyushambe airline had been associated with such an important event as the formation of the Tajik Autonomous Soviet Socialist Republic.  On one of the first aircraft arrived in Dyushambe, arrived members of the leadership of the first Government of Tajikistan. From that day civil aviation of Tajikistan begins its difficult but interesting historical path. It was then that was formed Stalinabad airfield complex, and started to operate new routes passed through the Pamir mountain range. The first air bridge linking Dushanbe with Bukhara was of great importance for the young republic, where lack of roads was the major problem, because of which state plans and tasks could not be accomplished.  As it was 5 years later when the construction of the railroad that connected Duyshambe and Termez had been completed and the first train arrived in our country only in 1929.

In the early days of civil aviation flights were made visually, since the intensity of air traffic was not high. At that time, crews managed the en-route operation independently. Until the number of the aircraft was small there was no need to create a special service of Centralized air traffic control from the ground but as soon as the number of flights increased dramatically, there was a need for a similar service and establishment of certain rules in the air traffic management and flight ensuring with the radio-technical equipment for controlling the movement of aircraft, navigation, landing and communication.

Under these conditions, the crew, despite of his skillfulness was unable to take off and land safely. Only special aviation service could correctly determine the sequence and timeslots of aircraft’s takeoff, providing the aircraft safe separation. And similar service was created in May 20, 1945 immediately after World War II, by order of Head of the Tajik Civil Air Fleet Management under # 129 of May 15, 1945 and it was called Air traffic Control Service.  It was immediately joined by the demobilized military aces who had returned home from the front. Also in 1945 the Tajik Civil Air Fleet Management received new aircraft U-52, Li-2. Li – 2 crew’s first flight was from Stalinabad to Moscow.

Initially after formation of the Traffic Service Department of Tajik Civil Air Fleet, the airport control tower of the republic was located in the upper part of the medical unit building of the State Unitary air company. Communication with the aircraft at the time was a telephone and shortwave.

At the time, responsible person for the order on the airfield was a man on duty of Stalinabad Airport Yakov Ivanovich Khoruzha. According to ATC instruction a landing mark in formation of letter “T” with white cloth was laid out and this instruction was performed by Yakov Ivanovich’s wife Maria Petrovna. And in the early '50s a new controller Vasiliy Frolov Gavrilovich, graduator of the Leningrad aviation college (1953) came to the Air traffic Service , who had also finished in 1934  Balashov’s pilots flying school of Civil Air Fleet. 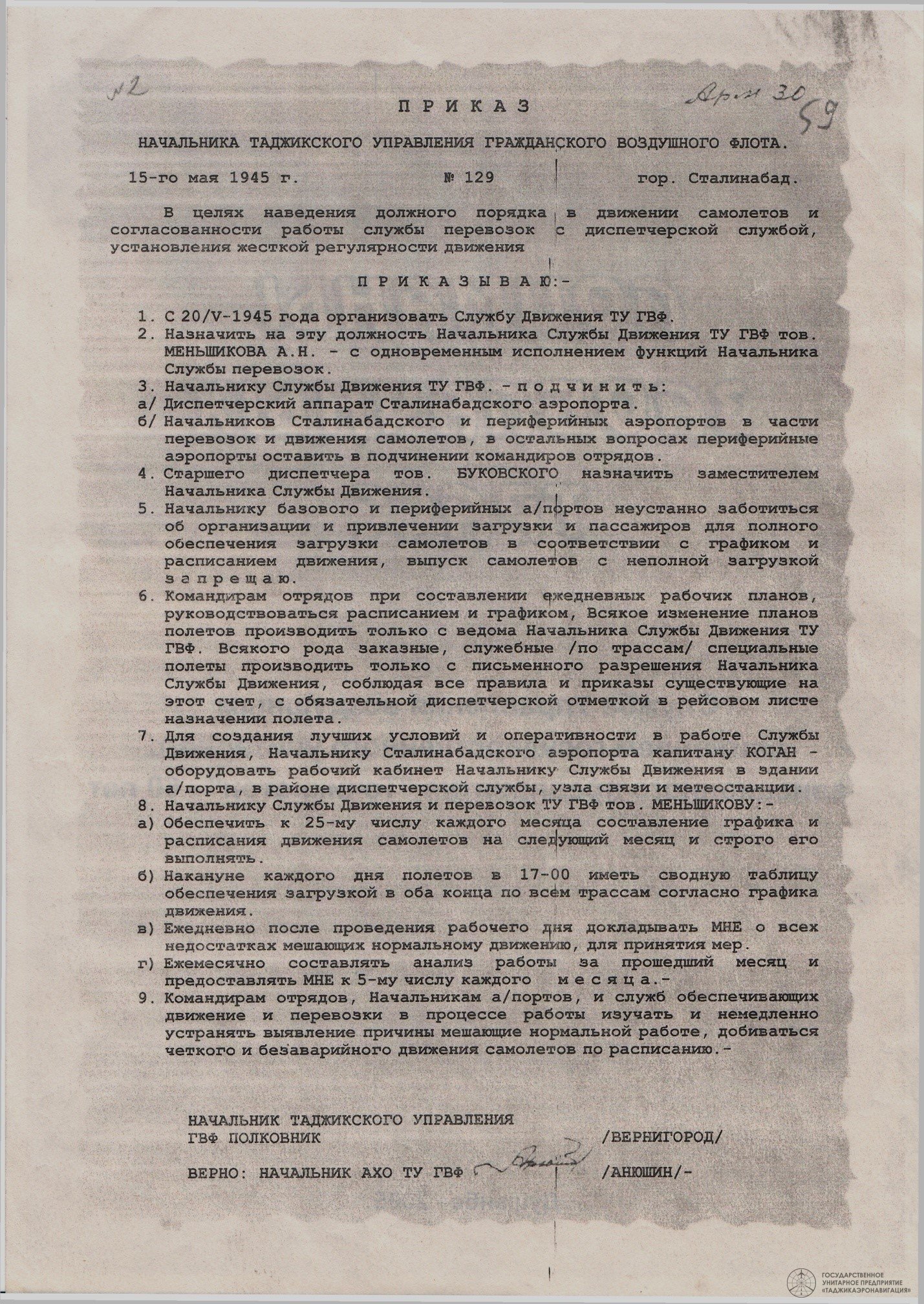 Before the war Vasiliy Frolov worked at the Khorog airport, and in the 40s he had a lot of flights with a known Soviet Union pilots Mariya Vasilevna Salova. Thus, he has flown more than five thousand hours. After finishing his flying activities he started working as controller of Traffic service at the Stalinabad airport.

There was a need for new vacancies, thus position for flight operation officer in Civil Air Fleet was introduced in 1950. It was introduced for the management of air traffic on roads and airfields in the area especially during landing. Only experienced pilots with special training were appointed to this position. At that time also were adopted documents, which were of great importance for improving the level of safety in terms of their growing intensity such as "General flight  Rules over the territory of the USSR for aircraft of all departments " and "Procedure for separation of aircraft at all altitudes of  Civil Air Fleet airlines."

Beginning from 1953 Aeroflot started receiving surveillance radars, not only made the manager to "hear" but "seeing" This happened thanks to widespread adoption of ultrasonic communication in the second half of the fifties, which at times has increased the efficiency and quality of the radio communication. Significant traffic growth of jets by 1958 required radical reorganization of traffic service. Subsidiary control points were created, there were organized head area control centers, which was responsible the management and control of movement of transport aircraft of all departments on the airways of the USSR at altitudes above 4,500 meters.

Aviation of Tajikistan began developing quite rapidly, one of the displays the renewal of the aircraft fleet of the country. Air transport has become the most important sector of the national economy. Aviation of Tajikistan provided regular traffic   connection of the capital of the Republic with all   highland villages in remote valleys  such as Vanj, Rushan, Shugnan, Bartang Yagnob and others that  reduced hundreds of times  the travel time of passengers of mountainous region of  Pamirs, Karategin, valleys of  Vakhsh and Hissar. In 1950-1960 years aviation in Tajikistan was one of the most developed sectors of the national economy.

In 1958, the purposeful work on the application and use of means of objective monitoring of flight and air traffic control instructions have been started, including "Instructions for Use for photo recording for  objective monitoring of the quality of landing performance", and a little later - "Instruction on organization and traffic management  of aircraft on the airways of the USSR ", which  defined more perfect  organizational structure of air traffic service in the vicinity of airports, and its functions expanded. 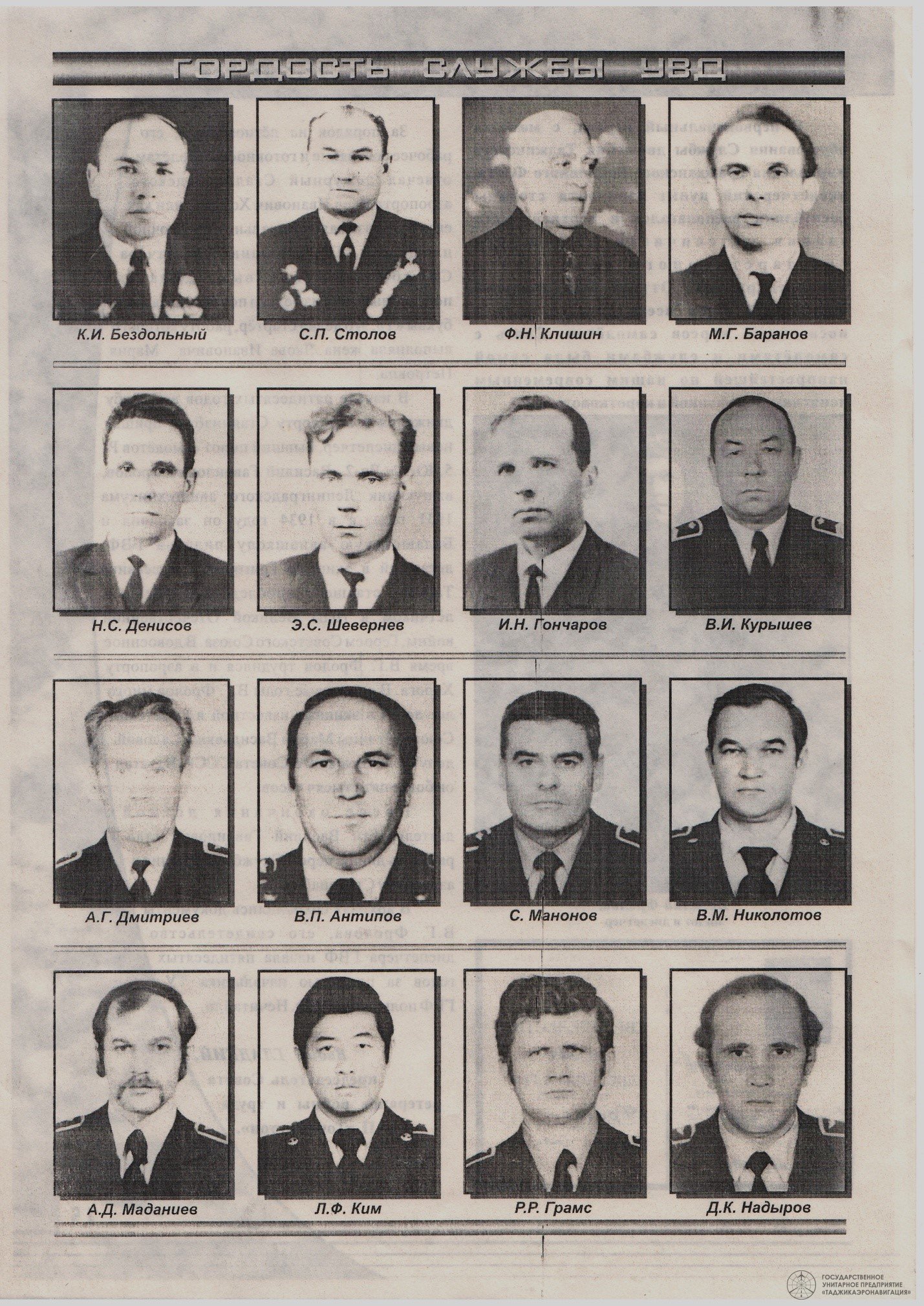 As we mentioned above, Tajikistan aviators have always been at the forefront of the development of socio-economic potential of the country. Structure of the Management of the Tajik Civil Air Fleet were expanding and developing. In 1959 Leninabad air company and after a year Kulob Airport was organized. Sharply began increasing the volume of air traffic. February 28, 1960 in the history of civil aviation was opened entirely new page, which was marked by the first arrival at the airport of Dushanbe turboprop airliner Il - 18. New aircraft such as turbojet Yak - 40 (1969) and turboprop Lee - 24 (1968) allowed significantly increase the manner of service on domestic routes.

On March 3, 1960 airport terminal and runway were put in commission. After 4 years, the Tajik Civil Aviation Department moved to the new conditions of management and planning. Yak-40, An-28 won 1st place in Aeroflot USSR according to its efficiency. In 1990-1991, aircraft fleet of the enterprise was replenished with aircraft IL-76, TU-154, Mi-8 MTV-1.  A new first retransmitter "Zardak"    was opened in the Central Asia, air traffic Dushanbe – Urumqi also was opened.

A significant contribution to further improving the safety and regularity of flights was made by new document which appeared in 1966, "Manual on flight operations." Flight rules and air traffic control ensuring more close and clear cooperation of flight services were included for the first time in this important document. This instruction was reprinted several times due to the fact that had some amendments. Due to increased requirements to the workers of air traffic service, and   increased intensity of aircraft flights, implemented automated operation of ATC, and also with the gained experience on organizing and improving air traffic control in 1981 was worked out and introduced a «Manual on traffic service in Civil Aviation of the USSR. "

In the air traffic control service at that time worked specialists, graduates of the colleges of Leningrad, Riga, Ulyanovsk and Kirovograd.

Because of upheaval in 90s many highly skilled persons left Tajikistan, affecting in ATC service with shortage of personnel. To solve the situation SUE "Tajikistan" organized study of air traffic controllers at the Academy of the Republic of Kazakhstan, the Kyrgyz aviation college and in other countries.

Significant contribution to the development of Republic ATC service was made by our veterans, among them Viktor Pavlovich Antipov - a graduator of the Order of Lenin Aviation Academy in Leningrad. For many years he headed the department of traffic service and traffic unit in the Tajik Civil Aviation Authority. After disintegration of USSR many experts were forced to leave the country and organize air traffic already in other CIS countries.

After the USSR disintegration the only international air corridor #13 “Termez” that passed through Dushanbe area center control of ATC went within the competence of Samarkand ACC. Consequently, there arose a question of creating transit international air routes passing through the airspace of the Republic of Tajikistan. Thanks to the efforts of the ATC administration during 1994 -1996 four new international air corridors on the border between Tajikistan and Afghanistan, connecting Europe with Southeast Asia were opened.

For further development ATC service cooperated with the colleges from other countries, such as Russia, Kazakhstan, Belarus, Kyrgyzstan, Uzbekistan and the Baltic countries. Being one of the founders of the Coordinating Council of the "Eurasia" ATC service has actively participated in international meetings.